Love for the Marche doesn’t come at first sight. 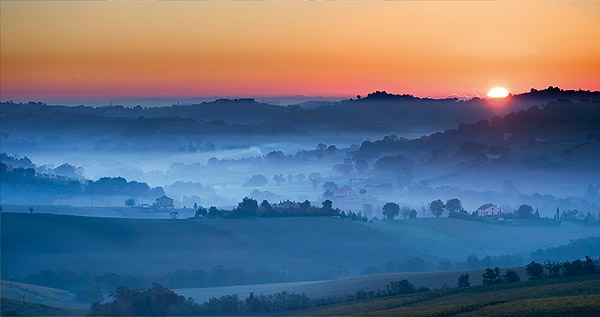 Just as water from the River Sentino has dripped for centuries in the same places and created the vast limestone chambers in the Frasassi Caves, the scenery of the Marche gradually seeps into the soul, until it eventually becomes a substantial source of fascination. The rolling hills rise up from the Adriatic Sea toward the Sibillini Mountains, which are steeped in legend and give the region its distinctive boundary.
The medieval villages and Renaissance cities perched on top of the hills developed around the natural shape of the land. All around are neatly cultivated fields. In the spring, they are filled with wheat that turns emerald green in the seasonal showers. In the autumn, they lie bare and dormant as the locals light warm fires and enjoy chestnuts, new wine and game.The Marche is a land of farmers and craftsmen.
It has always kept away from the more frenzied side of society and remained devoted to good work, as is demonstrated by both the care taken over its territory and the superb output from local small and medium enterprises. The region has also made a significant contribution to the development of culture and the arts in Italy and across the globe. It is perhaps due to the unique geography of the area that the Marche has produced so many masters of perspective: from the innovative paintings of Raphael to the introspective poetry of Giacomo Leopardi and the magnificent film sets of Dante Ferretti. As Guido Piovene wrote, the Marche encapsulates the best of Italy in a single region, offering a loving embrace that never ends.

This website uses cookies to improve your experience while you navigate through the website. Out of these, the cookies that are categorized as necessary are stored on your browser as they are essential for the working of basic functionalities of the website. We also use third-party cookies that help us analyze and understand how you use this website. These cookies will be stored in your browser only with your consent. You also have the option to opt-out of these cookies. But opting out of some of these cookies may affect your browsing experience.
Necessary Sempre abilitato
Necessary cookies are absolutely essential for the website to function properly. This category only includes cookies that ensures basic functionalities and security features of the website. These cookies do not store any personal information.
Functional
Functional cookies help to perform certain functionalities like sharing the content of the website on social media platforms, collect feedbacks, and other third-party features.
Performance
Performance cookies are used to understand and analyze the key performance indexes of the website which helps in delivering a better user experience for the visitors.
Analytics
Analytical cookies are used to understand how visitors interact with the website. These cookies help provide information on metrics the number of visitors, bounce rate, traffic source, etc.
Advertisement
Advertisement cookies are used to provide visitors with relevant ads and marketing campaigns. These cookies track visitors across websites and collect information to provide customized ads.
Others
Other uncategorized cookies are those that are being analyzed and have not been classified into a category as yet.
ACCETTA E SALVA